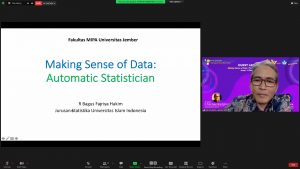 “Automatic Statistician has been researched around 2016, and I want to share why I came to this direction,” said Dr. Raden Bagus Fajriya Hakim, S.Si., M.Sc. Lecturer of Department of Statistics, Faculty of Mathematics and Natural Sciences, Universitas Islam Indonesia in a Guest Lecture with theme “Making Sense of Data: The Automatic Statistician“. The event was held online by Data Science Research Group, Department of Mathematics, FMIPA University of Jember (15/10). Hakim continued that time and process were needed. “First, we did collection, organization, analysis, interpretation and presentation of data that is manifested in a big data” he said that in this event moderated by Abduh Riski, S.Si, M.Si. a lecturer of tDepartment of Mathematics FMIPA UNEJ. Hakim also presented about problems in big data: Volume, Variety and Variety. In addition, there is a Veracity, accuracy and level of trust in data. “Among 5V which is a problem in big data, the fifth V is Value, most important thing because statisticians must be able to determine the price of a data,” he said, which in this agenda showed activities Department of Statistics, Faculty of Mathematics and Natural Sciences, Universitas Islam Indonesia related to data science. In the data processing process, several tasks that could become job opportunities were also explained. “Data Engineering for the process of data collection and organization, Data Analytic on organizational processes, analysis and interpretation, the last one is Data Visualization on the interpretation and presentation process,” he explained. Hakim also explained the courses that could be implemented in a data science, not only in statistics but also in contact with non-statistical subjects such as programming algorithms or calculus.

Previously, Head of Data Science Research Group, Department of Mathematics, FMIPA UNEJ, Dr. Alfian Futuhulhadi, S.Si., M.Si said Guest Lecture activity was an accidental routine agenda. “It can be called an accidental routine because some members of our research group received grants and several guest lectures were held by presenting speakers from other universities,” he said. Alfian also hopes that there will be cooperation in research with several universities such as UGM, UNS and UII, especially through Dr. Mohamat Fatekurohman, S.Si., M.Si. a member of Data Science Research Group either a fellow research group or department. Head of Department of Mathematics, FMIPA UNEJ Kusbudiono, S.Si., M.Si. hopes for the same in terms of research collaboration and also adds that there is an exploration in Merdeka Belajar Kampus Merdeka (MBKM). “With FMIPA UII we can do student exchanges, guest lecturers between the two faculties because this is also a requirement for IKU Perguruan Tinggi,” explained Kusbudiono who officially opened tGuest Lecture event.

Event continued with discussion with participants, starting with one students asking about the skills needed by students to face the competition of data science and data analysts in the automatic statistician era. Dr. Hakim answered that domain knowledge is the basis, so that it becomes the initial capital for students to be able to understand data sains. Prof. I Made Tirta and Dr. Alfian Futuhulhadi asked about machine learning genetic algorithms. Prof Made is more detailed about the implementation if you use an ordinary computer instead of a special server. “In machine learning, can all data domains be used or only certain data, for example, the Covid-19 data which has recently missed?” asked Dr. Mohamat Fatekurohman, S.Si., M.Si. In his answer Dr. Hakim mentioned again about domain knowledge, it is  task of statistician to assess the value of the data, whether it is necessary to use machine learning or not. The Guest Lecture was closed with a group photo session by Dian Anggraeni, S.Si., M.Si. as Master of Ceremony.